On this page, you’ll find images of Priscilla Tully, a long-time summer resident on Islesboro. 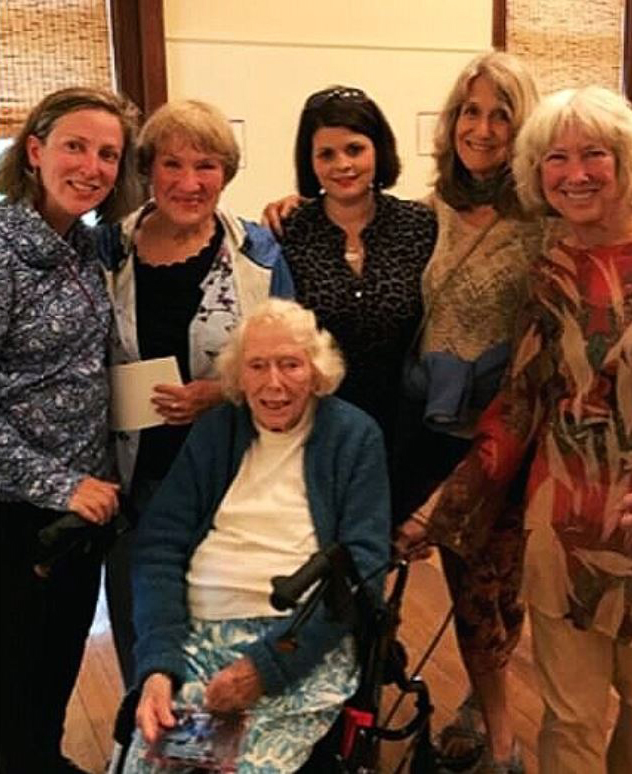 Photo taken in 2019 in Pendleton Hall at the Historical Society. Priscilla Tully is pictured in the foreground, Ellen Tully (one of her daughters but absent that day) told us, “Left to right behind her are my second cousin Maurine Fanguy, cousins Penny Tully, Heather Tully, Mary Ann Tully, and my sister, Sarah Tully.”

Priscilla’s birthday was celebrated on February 28th, 2020, in Bermuda, where “eighteen people came down to celebrate with her. Some of them were friends from Ryder’s Cove in Maine, where she also likes to vacation.” (Bermuda Royal Gazette)

Priscilla Tully’s daughter, Ellen, writes: “My mom's great-grandfather, Captain Charles A. Barbour, was from Bangor, and my grandmother was an only child living outside of Boston. (The Barbour’s family business, located in Brewer, was building steamships that plied the waters of Penobscot Bay). Captain Barbour sailed around Islesboro and bought the gingerbread house in Ryders Cove in 1894. My mother was about two years old, I think, when she first came. They took a steamer from Belfast - either the Goldenrod or the Sheldrake - into the wharf at Ryders Cove.”

“My grandfather would go get a wheelbarrow from the house, and they would bring their luggage up to the house. The lawn would be so long, and mom recalls a snake climbing on her leg. As a child she remembers the Pendleton store mid-island (just south of the library), which would have been difficult to walk to. I believe they had another store before Durkees, (the Burgess Store), which they probably used. One time she and her mom walked all the way to Hewes Point (four miles) to deliver a pie. Priscilla used to swim off the rocks up in the cove, float on a raft, and play croquet and tennis down at a house on Billy Shore Road. She remembers the movie theater (just south of the Historical Society on the Main Rd) and might have gone there at some point. Mother remembers going to the dance hall associated with the inn here at Ryder. They tore the inn down in 1929 but left the dance hall. She used to go down there to dance and had a crush on someone by the last name of Tuck. The first name begins with an “E”.”

In 1950 she and my dad, (Robert (Bob) Tully, a retired navy officer who died in 1980), bought the two cottages next door. We stay in one and rent the other. In the original cottage, everyone who visits has written their names on the wall in the dining room and the date they arrived. My grandfather did a sketch on the other wall in pencil, so this room has never been painted. We have come every summer except one when we were in Panama, as my father was in the Navy, and we were stationed there. We have had many renters who have returned every year- one set for 32 years. My mom had her 100th birthday in Bermuda, and she calls Bermuda her second favorite island. I think you can guess what is her first. She feels fortunate that her friends and family can return to Ryders Cove every summer. Some of my closest friends are from the island. It’s like a magnet which draws our loved ones back.”    by Amanda O’Bannon


More pictures of Priscilla and her family. 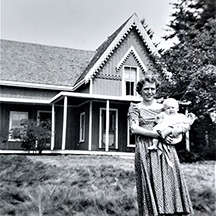 Priscilla Bailey Tulley with Ellen in front of Barbour Cottage. 1952 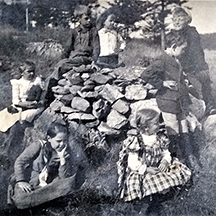 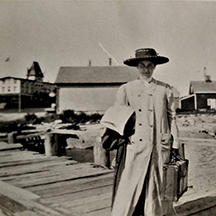 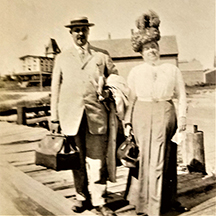