We dedicate the 2022 Art Shows to Mary Ella Rolerson Grinnell who died this summer at the age of 101 just days before the return of IHS Summer Art Shows after a two-year hiatus due to the pandemic.

Mary Ella was not only one of the founders of the Islesboro Historical Society, along with her brother, Jesse Rolerson, but she also had a passion for art - specifically the art of Andrew Wyeth. In 1962 she organized a show in Pendleton Hall for Wyeth, attended by the artist himself with whom she had formed a genuine friendship.

Please join IHS in honoring this special woman with a double love for Islesboro history and Maine art. 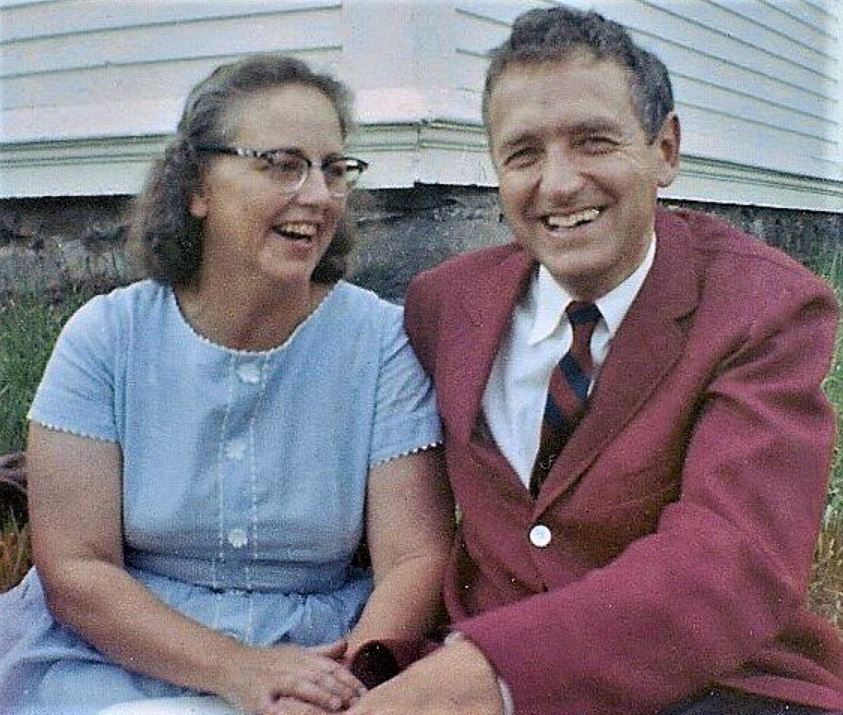 
The flag was raised in celebration August 25, 2020 at the Islesboro Historical Society, 100 years after the birth of Mary Ella Rolerson Grinnell (8/29/1920), the dynamo responsible for the creation of the Islesboro Historical Society. The celebration of Mary Ella’s birthday included a rousing chorus of Happy Birthday led by John Oldham and sung by a masked and socially-distanced group of well-wishers, which was videoed and sent via the internet to the birthday gal.

Two grandsons, two nieces, and two close family friends attended the family party at The Homestead in Cushing, where Mary Ella now lives. The Homestead served them all lunch and there was cake. A granddaughter sent 100 roses for Mary Ella’s celebration.

John Mitchell, past President of IHS, raised the flag at the IHS the day of the celebration. He said “There would be no Islesboro Historical Society without Mary Ella and her brother, Jesse. Throughout the years, she has maintained an interest and curiosity about what’s going on with the IHS.”

AnnMarie Mouw has boxes of photos and memorabilia from her Aunt Mary Ella. The Islesboro Historical Society is working with her on a virtual exhibit about the early days of the IHS. AnnMarie recalls that Mary Ella became fascinated by the art of N.C. Wyeth when she was in college in Hartford, CT. Learning as much as she could about him and his artwork, her passion led her to became friends with his son, Andrew Wyeth and his family. Later in 1965, Andrew and his family attended her daughter, Dawn’s, wedding on Islesboro.

In late July of 1962, Mary Ella invited Andrew Wyeth and his family to Islesboro for the first art show in the old school building.  “The show was a big deal”, AnnMarie recalls. “I think there were 37 original paintings by Andrew. Artists from all over the country loaned their paintings by Andrew Wyeth for the show. She insured them with the help of Henry Hatch. We had a watchman 24 / 7 at the Historical Society. My grandmother Anne Jones Rolerson, Aunt MaryElla’s mother, put on quite the luncheon for them at her house.”

The magazine, Art in America, had carried a feature story on Andy Wyeth. They sent Mary Ella 100 copies of that edition to sell, which raised money for an art program in the school. John Mitchell said, “Mary Ella is largely responsible for the things the IHS does today.” That includes the tradition of art shows, which Amanda O’Bannon notes have been an integral part of the IHS since Day 1.

Around 1961, the Historical Society began to meet at Jesse’s home. Mary Ella and Jesse collected photographs and objects of historical interest and stored them away. Eventually, the siblings had accumulated enough material and community support that it came time to find an official home for the IHS. The old Islesboro Town Hall at the corner of Main and West Bay Roads, which later functioned as the school, had been vacant since 1954.  In 1964, the Town of Islesboro sold the building to Mary Ella for $1. She turned it over to the Islesboro Historical Society. And the rest, as they say, is history.